A reimagining by the Soul Stealing Ginger
January 17th, 2015

I recently had a conversation about which laws to break and which to keep wholly.  Of course, my interlocutor immediately proclaimed that the holy laws must be kept wholly.  I knew immediately that I would get no sleep that night.

My first challenge was to decide which “Christian 10” were the true ten commandments.  I decided I would use that every wonderful, extra accurate source, Wiipedia, to find out.

Well, that was mistake number one.  Apparently, I need to decide which of the roughly 2 billion christians who belong to the 77,000 minor offshoot sects of the hundreds of major branches qualify  as “Christian”.  Should Christian Scientists, a 19th century new age-y metaphysics sect qualify, after all they have “Christian” in their name?  Do Mormons, who consider themselves christians count, even as much the rest of christianity would exclude them?  Can Messianic Jews be allowed a voice, even as much of christianity has spent last millennia trying to purge Judaism through everything from forced relocation to Zyklon-B?  Which of the coptic, orthodox, catholic, protestant, calvinist, presbyterian, wesleyan, baptist, anabaptist, pentecostal, witness, et al. shall I accept?

But that is a rathole I need not travel down.  Perhaps I will just ask wikipedia for the list of the Ten Commandments, that will short circuit my concerns.

Or not.  There appear to be wildly varying descriptions of the nine / ten / eleven commandments depending upon tradition, geographic region, age, et al.  Without trying to decide between the Septuagint, Philo, Augustinian, Catholic, Talmudic, Lutheran, awwww fuck it — I’m’a just taking the table from Wikipedia and rolling with it.

Commandment number one “I am the Lord thy God”.  This one is not in all of them.  Not only is he inconsistant, but he is a jealous god.  I’m actually happy to see that some major part of christianity, the part that didn’t live in Yul Brynner’s viewing area, doesn’t seem to hold this one.  My general take: I didn’t vote for him.

Commandment number two “Thou shalt have no other gods before me”.  My take: for a God so hell bent on monotheism, he sure did mess up all his creation.  Why give us Muslims and Hindus and Zoroastrians.  Jesus Himself Christ on a pogo stick, make up my fucking mind and pick one if you are so insistent.

Commandment number three “Thou shalt not make unto thee any graven image”.  This one makes up in some places for the missing first one.  Is he so goddamn vain that he doesn't think the artist could do him justice?  Or is he just really ugly?

Commandment number four “Thou shalt not take the name of the Lord the God in vain”.  My take: Oops!  I guess I should have thought about my previous answer.

Commandment number five “Remember the Sabbath and keep it holy”.  My take: as much as I like this bronze age OSHA legislation, nobody can seem to agree when the actual “Sabbath” occurs.  Adding complication is that the calendars have not remained consistent over the span of christianity — everything from daylight savings time to the Russian adoption of the gregorian calendar would jack this one up if the different sects ever decided which day it is.

Editors note re: #1 - #5: For the record, we are half way through and there is not a damn thing about getting along with ones fellow man.  Whatever.

Commandment number six “Honour thy father and thy mother”.  My take: what if ones mother was a hamster and ones father smelt of elderberries?

Editors note re: #7 & #8.  About half the systems flip the importance of killing verses fucking.  Apparently, lots of christianity is really cool with the idea that having some rule violating sexy fun is more serious a transgression than killing people.

Commandment number seven/eight “Thou shalt not kill”.  My take:  I spent a great deal of time in Texas.  There, a legal defense to murder is “He needed killing”, at the risk of running afoul of Godwin’s law, I’m just gonna say “Hitler”.

Commandment number eight/seven “Thou shalt not commit adultery”.  My take:  Monogamy is barely practiced anywhere in christian history.  Mostly only where the ownership and property rights over women have limited their sexual options through threats of violence and shame.  Men have almost never been under such constraints.  All I can say is “Oh The Hypocrity!“   I think God should read Sex At Dawn, or maybe just his own super book of holy truth, before he writes stuff like this.  Deity fail.

Commandment number eight/nine “Thou shalt not steal”.  My take: God finally got one right, but it took him until eight?  I do not think this guy is not the most omnipotent knife in the universal drawer.

Commandment number nine “Thou shalt not bear false witness against thy neighbor”  My take:  Lying is bad m’kay.   Ok, this one is sorta cool, but I wonder, would God say those jeans make thine ass look fat?

Commandment number ten “Thou shalt not covet thy neighbors house, wife, servants, ass, etc”  My take:  I like to covet my neighbors wife’s ass. Don’t cockblock me God. 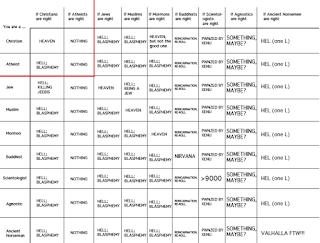 Who Is The Soul Stealing Ginger?